1 About the Value of Education 1 comments   |   90 shares 2 Civil Discourse in Action — with Sam Cole and Carol Burris 81 shares 3 Public Schools Can’t Solve America’s Crisis of Purpose, But We Can Do A Lot More 64 shares 4 Teacher Strikes: A Civil Discourse in Action Live Webinar 59 shares 5 Hanna Skandera on the Promise of Education 58 shares 6 Voices: with Margaret Spellings 1 comments   |   50 shares 7 A New Approach to College Readiness 28 shares

Student Voice and the #NeverAgain Movement

While the crowd size for March for Our Lives and the motivation of its backers may be debated, the might of the student leaders and participants cannot. Their voices were impassioned, purposeful, smart and sophisticated.

Angus Johnston is a history professor and student activism expert from the City University of New York. In a recent Statesman Journal article he said of the students, “They don’t play by the old rules. They are willing to do things and say things that their elders are not.” Indeed.

The Marjory Stoneman Douglas students have launched a powerful, national movement in the blink of an eye. Their response to the tragedy at their school has been immediate and unrelenting. Amid profound grief, the high schoolers took media interviews with the skill and grace of trained professionals. Four days after the shooting they announced March for Our Lives. They led students across the state aggressively lobbying both Florida and federal lawmakers. At their urging, students throughout the U.S. walked out of their schools on March 14. Marjory Stoneman Douglas High School student journalists authored a manifesto of proposed changes to gun policy and published it in The Guardian newspaper. And, importantly, the student leaders started a GoFundMe page that raised nearly $2 million and created a framework to hold March for Our Lives in more than 800 locations around the world. For those who may question whether #NeverAgain is a moment or a movement, the students also have outlined a solid agenda that balances awareness with action like increasing voter registration among young people in the days and weeks ahead. 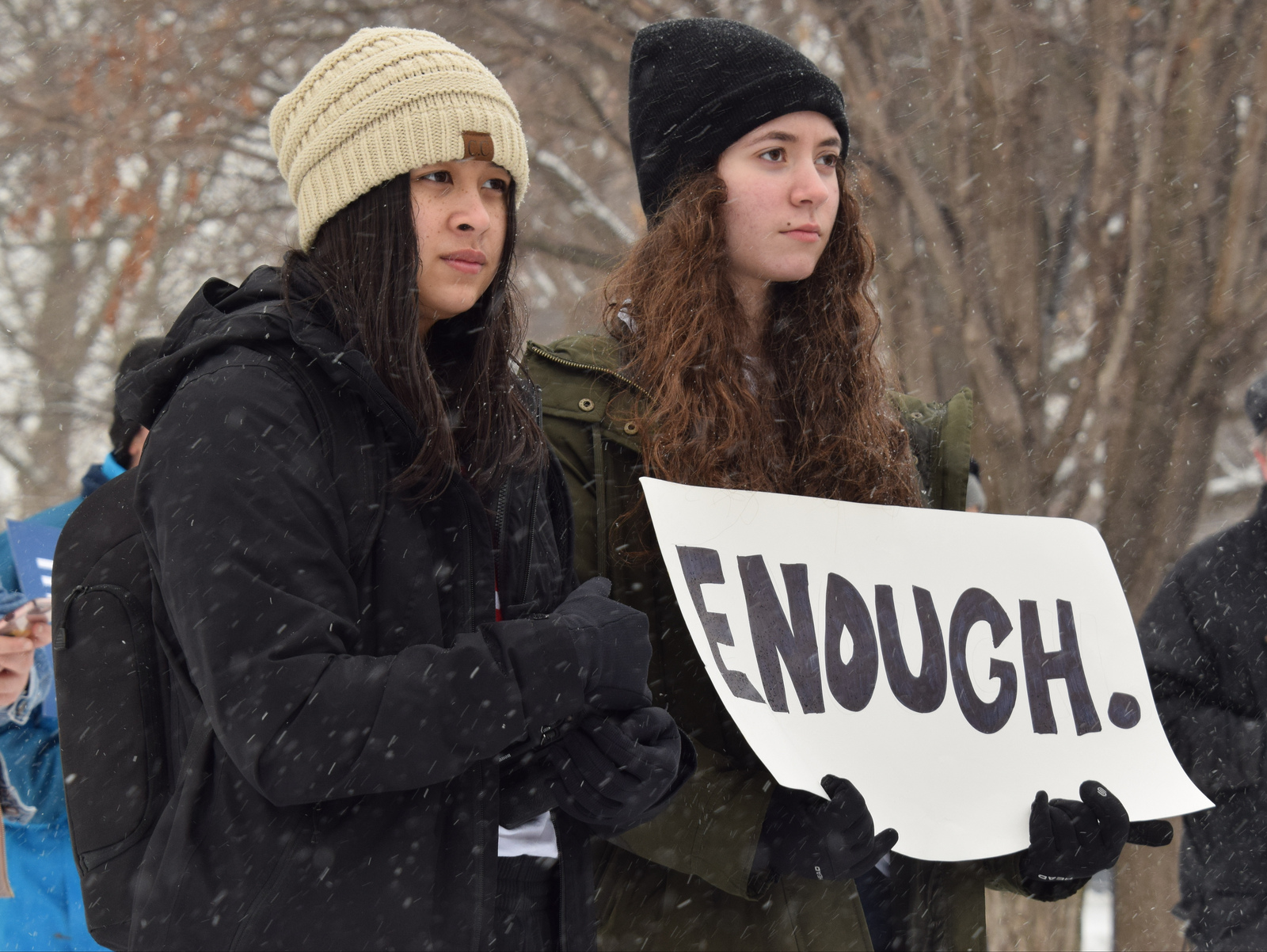 Sure, the students have had support from adults including their parents and teachers and celebrities – a point of criticism from some. Curiously though, those stars that appeared on March 24 at the Washington, D.C. march may have made financial contributions or shared their talent but took the stage without any introduction. The day clearly belonged to the students. And it was real and raw.

As anyone who teaches teens or has one of their own could conclude, the social savvy of our youth has had impact on #NeverAgain. According to a Pew Research Center social media study, more than 71 percent of teens say they use more than one social media channel. By middle school, working with words and images and video and building a following are second nature. Students simply get the cadence of social posts and how news breaks across channels. They share personal information with candor and ease – to the amazement of most adults.

Florida’s civics education program also may have bearing. Students from Stoneman Douglas, like thousands of others throughout the state, have had civics education since middle school because it is the law. The Sandra Day O’Connor Education Act, named for the former U.S. Supreme Court Justice, mandates 7th graders take a civics class and be tested on their knowledge. It also provides for integrating civics content into the curriculum for all grades beginning in Kindergarten.

Civic engagement is a commitment that at least one teacher at Stoneman Douglas takes very seriously. In an interview with NBC, AP government teacher Jeff Foster said he teaches his class, “If you don’t participate, you can’t complain.” That is a lesson that his students, several of whom are leaders of the #NeverAgain movement, have taken to heart.

In North Dakota, for example, command of civics has been a graduation requirement since August 2015. Kirsten Baesler, superintendent for Public Instruction and a member of The Line Editorial Advisory Board, says “Civics education is fundamental for us to have true equity in this nation.”

In South Carolina, where Robin Wright teaches social studies at the Orangeburg High School for Health Professions, the Education Commission of the States reports high school students “must pass a classroom examination on provisions and principles of the United States Constitution, the Declaration of Independence, the Federalist papers and American institutions and ideas. This instruction must be given for a period of at least one year or its equivalent, either within the required course U.S. History and Constitution or within another course.”

In Wright’s American government class, she emphasizes practicing lessons about government and democratic process with activities that bring classroom learning to life. For example, each semester she gives students opportunity to write to legislators about a subject that’s important to them. They did the same after the March 14 walkout. And the Social Studies department sponsors a voter registration drive.

I never want my students to think that government or anything that our government does has nothing to do with them.
Robin Wright, Social Studies Teacher, Orangeburg High School for Health Professions

“I never want my students to think that government or anything that our government does has nothing to do with them,” Wright says. “I want them to understand that as minute as it may seem, there is some effect on your life the government will have… and it’s very important as an American citizen that you know what it is, and that you know what voice you have to speak for it or against it, or to make new suggestions, or even to run for an office if you like.”

In her role as superintendent of the North Dakota Department of Public Instruction, Baesler also has created opportunity for students to share their voices by forming a State Superintendent’s Student Cabinet. The group of 20 students, ranging from fourth graders to first-year college students, serves an 18-month term. They meet quarterly to provide the superintendent with their opinions and suggestions about the education system. According to Baesler, the opinions of cabinet members have influenced legislative support for early childhood education, Advanced Placement courses, remediation assistance and legislation to deter bullying. One of the cabinet’s members, Dawson Schefter, has pushed for student representation on local school boards.

Skyler Strand, a sophomore at Bismarck High School in Bismarck, North Dakota serves on Baesler’s cabinet. He is proud of his participation and believes students should weigh in on issues that are important to them, including gun violence. “I personally think it’s great for students to step up and get their voices heard,” Strand said. “I think with how many school shootings have happened lately, and just overall tragic events that have happened in schools. It’s time for the students’ voices to be heard rather than adults.”

Gracie Johnsrud, a member of Baesler’s cabinet, shares that sentiment. Johnsrud is a junior at Watford City High School in Watford City, North Dakota, about 120 miles from the Canadian border. She is encouraged by the student expression about gun violence, even if she doesn’t agree with everything that is being said. “I think it’s really important because, from my point of view, I don’t think that students, or younger adults, have had much of a voice coming into now,” she said. “Whether or not you agree, I think it’s important that someone is standing up, and saying something.”

I think there are students that are smart, capable and powerful…
Thomas Tiegs, freshman at Ellendale Public School

Another cabinet member, Thomas Tiegs, is a freshman at Ellendale Public School in Ellendale, North Dakota. His school has 95 students enrolled in grades 9-12. Tiegs also believes in student voice. “I think there are students that are smart, capable and powerful,” Tiegs said. “Student voices and concerns should be heard, but we should not be able to dictate policy. This should ultimately be left up to the lawmakers at the state and federal level. AR-15s and the second amendment should not be done away with. I think that student voice is of the utmost importance in education, but when it comes to guns it should mainly be left up to the adults.

Johnsrud’s father, Justin, is a teacher and coach at Watford City High School. He believes that student activism has been useful in “starting a conversation” about gun violence but also suggests that schools have an obligation to do more to develop the skills children need to articulate what they are thinking and feeling as they work through these issues. “We should have some sort of social skills curriculum. A lot of our kids are lacking those,” Johnsrud said. “I’m a CTE teacher, or career and technical education. What we’re hearing from a lot of the employers that we talk to and that our kids work with, is it’s those social skills, the people skills that kids are really missing out on. And if you don’t have the people skills, you miss out on things like bullying. You miss out on signs of kids with depression. You miss out on all these other little clues that could really change someone’s life, because your head’s down looking at your phone, or whatever the case may be.”

The practice of democracy is not passed down through the gene pool. It must be taught and learned anew by each generation.
Sandra Day O’ Connor

This piece is part of a larger conversation The Line is having about gun violence and its impact on U.S. schools.

A study, published in January in the Journal of Child Development, reported that late adolescents and young adults who voted, volunteered or engaged in activism ultimately went further in school and had higher incomes than those who did not mobilize for political or social change.

Researchers from Wake Forest School of Medicine, Fordham University and the University of Massachusetts measured the long-term implications of youth political and social engagement. They tracked nearly 10,000 youth across different ethnicities, racial and economic backgrounds and found that civic activity linked to better academic and financial outcomes regardless of early school performance and parental education levels.

Next Story
People Are Talking...